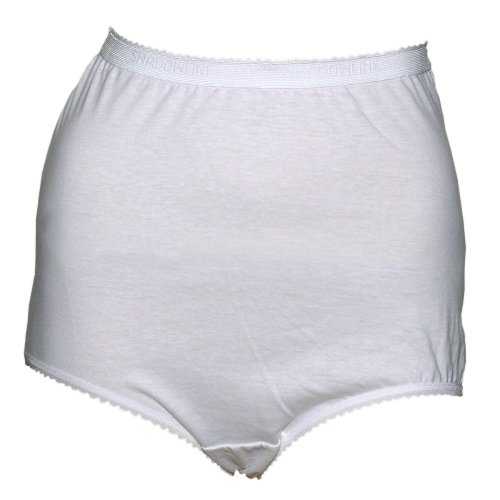 If you are a fan of 1960’s culture, such as what the TV show Mad Men tries to be, then you should be aware that the dapper 1960’s-era fashion is also making a bit of a comeback — a trend that has been directly attributed to the popularity of the fashion styles shown on that program:

And one item that has been consistently praised across the board is that the Mad Men fashion craze has brought back the Granny Panty.

That’s right:  SALES OF BIG PANTIES HAVE OVERTAKEN SALES OF THONG UNDERWEAR in the marketplace.

Part of the reason is because women have grown tired of suffering by wearing uncomfortable thongs or G-strings in an attempt to rid themselves of the dreaded VPL (“visible panty line”).  The other reason is that women have realized that big panties like their grandmothers used to wear — and as seen on Mad Men — are not just more comfortable than those thongs and G-strings, they also don’t show any VPL.

Big-girl underpants sales are up 42% in three months, according to a 2010 sales survey.  One manufacturer says that their sales have shifted 15% from thongs to larger panties.  Figleaves.com concurs, saying that their big underwear sales are up 28% over the past year, with a 2-to-1 ratio of the bigger panties for every G-string sold.

This is one case where more really can be less.