2013 is a wrap, but before we head boldly into 2014, let’s take a quick look at what all of you, our many Web Watch readers, have stopped by to take a look at over the past year:

2013: The End of Days or a New Beginning: Envisioning the World After the Events of 2012

END_OF_DOCUMENT_TOKEN_TO_BE_REPLACED

A few years ago when the TV show SURVIVOR was unique and different and much more awesome than it is today (not because today’s version is less challenging, but because Survivor has become more mainstream when compared to other programming — and because Web Watch has an awesome idea for Jeff Probst and crew that we’d love to see implemented on a future season of Survivor… if only Probst would return our calls)… where were we?

Ah – yes, a few years ago when the TV show SURVIVOR was unique and different, Web Watch helped with a promotion entitled URBAN SURVIVOR.  The premise was exactly the same, with contestants living in unfamiliar circumstances and having to compete in challenges to survive until the end.

END_OF_DOCUMENT_TOKEN_TO_BE_REPLACED

Thanks to all of you who took the time to visit WEB WATCH in 2012.

For those of you who weren’t able to read Web Watch every day, here’s a quick look at what everyone took a look at while they were here.

END_OF_DOCUMENT_TOKEN_TO_BE_REPLACED

There are fans of the TV show SURVIVOR – like Web Watch and others we know, who enjoy the adventure and gameplay that Jeff Probst and Mark Burnett bring to our television screens each week (along with the hysterical ignorance of every contestant to Jeff’s constant advice to always be looking towards the end-game in determining how to best strategize your way to a $1 million dollar grand prize).

And there are Super Fans, folks who study every aspect of the show – who train themselves on show trivia and gaming techniques in the hopes that they too will be picked by the shows’ casting directors and added to the list of hundreds of Survivor contestants who have pushed themselves to the limits (both mental and physical) to claim the title of Ultimate Survivor.

END_OF_DOCUMENT_TOKEN_TO_BE_REPLACED 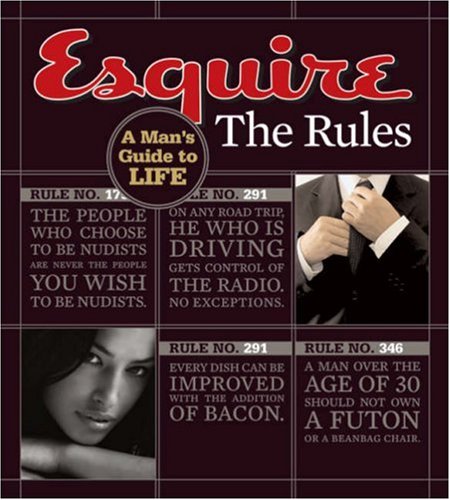 Esquire’s A Man’s Guide to Life: The Rules

Esquire’s book, A MAN’S GUIDE TO LIFE is just like THE MODERN MAN’S GUIDE TO LIFE or Denis Boyle‘s A MAN’S LIFE: THE COMPLETE INSTRUCTIONS – books filled with rules and helpful instructions to let any man prove that he is, in fact, A Man.  Web Watch highly recommends offering any of these three books to graduating high school seniors (or even as bar mitzvah gifts, since that is when A Boy Becomes a Man).

END_OF_DOCUMENT_TOKEN_TO_BE_REPLACED

In a previous post, Web Watch mentioned how GAME THEORY plays an important part in the reality TV show SURVIVOR.

The key to understanding what that means is to know what GAME THEORY is all about.  Luckily, Web Watch has found a way to boil it down into some bite-sized chunks for our faithful Web Watch readers.

END_OF_DOCUMENT_TOKEN_TO_BE_REPLACED

SURVIVOR is one of those shows, especially as it is about to enter its 20th season this month with an all-star HEROES VS VILLAINS theme, that Web Watch loves watching – if only because the show somehow always figures out how to be fresh, exciting, and surprising season after season.

Jeff Probst has even given all future contestants one vital hint on how to survive Survivor, and it all comes down to studying game theory, which Web Watch will cover in a future post.

One thing that Jeff didn’t feel the need to mention is that one key part of being on Survivor is that at some point during the game, you’re going to be naked.

Sure, the CBS censors may pixelate your NO NO ZONE, or the contestants may decide to show off their newly-buffed bodies in an attempt to increase their Survivor-provided 15-minutes of fame — but after 20 seasons (and approximately 300+ contestants), there was bound to be a glut of Survivor contestant nudity available at some point.

It was inevitable, really.