Are you a GOOGLE GOD?

Maybe you should sit down and check yourself, ’cause you ain’t got nothing.

END_OF_DOCUMENT_TOKEN_TO_BE_REPLACED

Do you love hamburgers as much as we do?  It is the ultimate American food, after all.

And deep-fried Twinkies.  That’s about it, right?

END_OF_DOCUMENT_TOKEN_TO_BE_REPLACED

By now, you’ve likely heard about Warren Buffett’s offer to pay out ONE BILLION DOLLARS to the person who registers and wins a 100% PERFECT BASKETBALL TOURNAMENT BRACKET.   (Note that they are not allowed to use the term “March Madness”, as Yahoo! Sports and Quicken Loans are not official sponsors of the tournament.

So what are your actual chances of winning that $1 Billion Grand Prize?

END_OF_DOCUMENT_TOKEN_TO_BE_REPLACED

Does your company have an iconic logo, one that defines who you are or what you do in an instant?

We’re not talking about a cartoon character spokesman, like the Geico Gecko (or the Geico Caveman, take your pick).  We’re talking something more akin to the “apple” logo for Apple.

As we’ve seen on any number of episodes of THE PITCH or CELEBRITY APPRENTICE, a vital part of marketing your business or product can come down to the most simple of items, THE LOGO.

END_OF_DOCUMENT_TOKEN_TO_BE_REPLACED

If the bathroom is dirty, then it’s likely the rest of the establishment isn’t being kept up-to-par.

If it’s a sparkly-clean restroom, then you can tell that the business cares about their customers.

END_OF_DOCUMENT_TOKEN_TO_BE_REPLACED 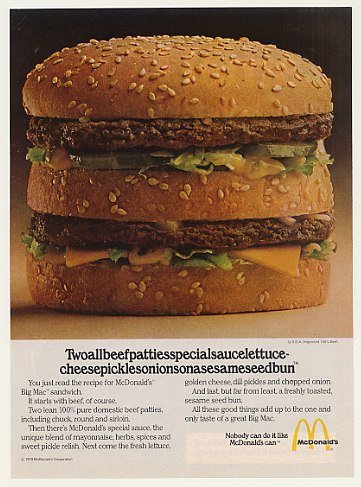 Web Watch would like to take a moment to salute the marketing geniuses at McDonald’s for continuing the McDONALD’s MONOPOLY PROMOTION.  It combines two great things into a singular quest to find the special missing sticker that will complete your game board.  Boo-ya!

Let’s cut straight to the chase:  there is absolutely nothing for you to do that will affect your ability to win this contest… other than doing everything you can to obtain as many game pieces as possible in the hopes that one of them is a rare chaser piece.

END_OF_DOCUMENT_TOKEN_TO_BE_REPLACED

CNN is reporting on a CHINESE MISTRESS CONTEST that resulted in one of the losing contestants dying while trying to kill the other mistresses, along with the man who came up with this brilliant idea.

The contest was held by a married businessman who had five mistresses, and he decided to lay off four of them due to the economic downturn.  His goal was to determine which mistress to keep.  None of the women wanted to lose their “job”, which came with a rent-free apartment and $730 monthly allowance.

In case you were thinking of running your own “best mistress” contest, this is what CNN reports are the three sole criteria used to pick the winner from this private talent show:

In the end, the businessman ended up paying $84,744 in compensation to the victim’s family and also shut down his business.  The four surviving mistresses also left him… as did his wife after learning of the affairs.